Another important aspect in these developing countries is their food safety systems. They have suffered some changes in production, distribution and consumption at rapid rate and thus the capacity of food governance systems lagged behind which generated food safety crises.

A study on Food Safety legislation in some developing countries shows that food safety systems in these countries are weak and fragmented thus failing to protect the consumers’ health or to enter export markets. Factors such as political instability, food insecurity, diseases, and natural disasters were prioritized by governments, hence food safety was not prioritized. Furthermore, the same study argues that food processing industries in emerging countries have the following characteristics: small size and neglected location as well as locations that are handled by non-food technologists. Besides, they are skeptical towards food regulating institutions, leading to a lack of knowledge regarding food regulation and therefore they keep their business unofficial. Additionally, the presence of multinationals in developing countries led to a two-tier food safety operation in these areas. Multinational companies have strict food safety management, as they have the capacity (laboratory testing, personnel etc.) for this, hence they focus on internal auditing rather than inspections led by governments. Whilst on the other side there are the local companies/startups which are characterised by unregulated food supply chain, prone to food safety risks.

A paper on business insights on emerging markets done in 2020 shows Africa as having some of the world’s largest growing economies in Rwanda, Ethiopia, and Cote d’Ivoire. However, due to political instability, shocks caused by natural calamities, and recently COVID-19 pandemic this has been affected. Furthermore, there is a great need for external resources to invest in infrastructure and capacity in the agricultural sector in order to enhance the production and processing facilities.

The Global Finance has made a highlight on the most attractive investment in emerging countries in 2020 based on their economic stability, political environment and business regulations. This analysis led to an interactive map with five colours ranking their attractiveness; red being a rich environment, orange showing the potential for good growth while yellow indicating opportunities. However blue indicates higher risk areas. Moreover, this data is supported by pros and cons for these countries.

According to this map, Rwanda is the only country in Africa marked with red, meaning there is significant growth projected as well as intense investor interest due to its fast-growing economy, favourable business environment and good infrastructure along with skilled labour.

Furthermore, countries such as Uganda, Senegal, Benin, Botswana and more, are marked with orange and have the potential for investments because of political stability, resources, and growing economy. Nevertheless, all these countries have some down points which hinder investments such as inefficient judicial system, government interference, inefficient regulation and lack of infrastructure. Furthermore, the areas marked with blue show higher risks due to political tensions, informal economies and lack of transparency. 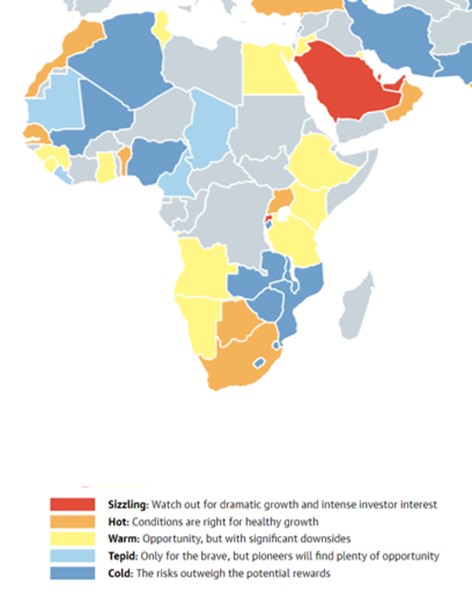 Portfolio with an id of "ukpages" is not defined.

In our Partnership Program we would like to work together with (Non)Governmental Organizations, Universities, Multinationals and Food companies.

iMIS Food Global is a fully equipped Food Safety platform for developing countries. Unique is the installation of an iMIS Food server at the Food company, for online and offline availability.

The online (no travel costs) iMIS Food implementation process includes 6 to 10 days of support and has a lead time of 3 months.